Physical Disability Rugby League has modified rules to enabling players of all ages and genders with a physical disability to play rugby league – to play the game they love!

Games are played under modified rules of ‘The Australian Rugby League Laws of the Game’.

How the game is played

The game is made up of two halves, each of twenty minutes and with a ten-minute interval.

As per NRL rules a Try will be worth 4 points and a Goal 2 points.

There are no scrums in the modified game.

An accidental knock on or drop ball is called as a tackle and at the completion of six tackles a change-over applies.

Red shorts are for –

Support roles during the game

Able-bodied (AB) players can play in a support role on the field in physical disability rugby league.

But not more than two AB players per team are allowed on the field at any time.

A tackle is achieved on an AB player by touch or tackle. 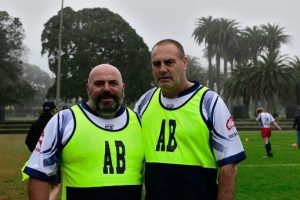 The AB on the right volunteered as an AB since PDRLA started until 2020.